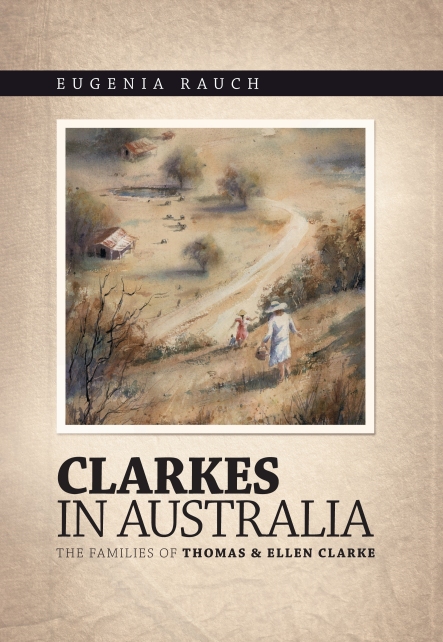 When they married in 1830, Thomas Clarke and Ellen Walsh began a dynasty that would grow to thousands of descendants.

Arriving in Sydney in 1836 with the 28th (North Gloucestershire) Regiment of Foot, Sergeant Thomas Clarke travelled to Bathurst, Port Macquarie and Van Diemen’s Land escorting convicts. But the lure of land ownership and a healthy climate encouraged Thomas and Ellen to leave the Army and settle near Clarence Town, building their home and raising their children.

Eugenia Rauch paints a fascinating picture that spans over two hundred years. Beginning the the life of the British Army soldier and his wife – in Corfu, Ireland and Australia, she brings to life the voyage to Hobart Town, the tiresome life of a soldier in colonial New South Wales and the possibilities open to settlers.

Through tales of everyday life, we see how they lived, copoing in the early settlements. Eugenia looks at all aspects of early Australian life to highlight the family’s contribution to the young nation. Francis Clarke, with his noble act of self-sacrifice, aided the federation of Australia.

The Clarke family, now numbering over 6500 descendants, worked on the land, lived in the growing towns and cities, struggled through the Great Depression and two Wars. Intertwining with other families – McMahon, Hayes, Smyth, Barrie, Egan, Campbell and McCarthy – they raised families that spread across Australia.